Among the states, major reduction in crop is reported from Karnataka. The post monsoon estimate for Karnataka is placed at 219,550 MT recording overall decline of 48,250 MT (-18.02%) over the post-blossom estimate of 2018-19. 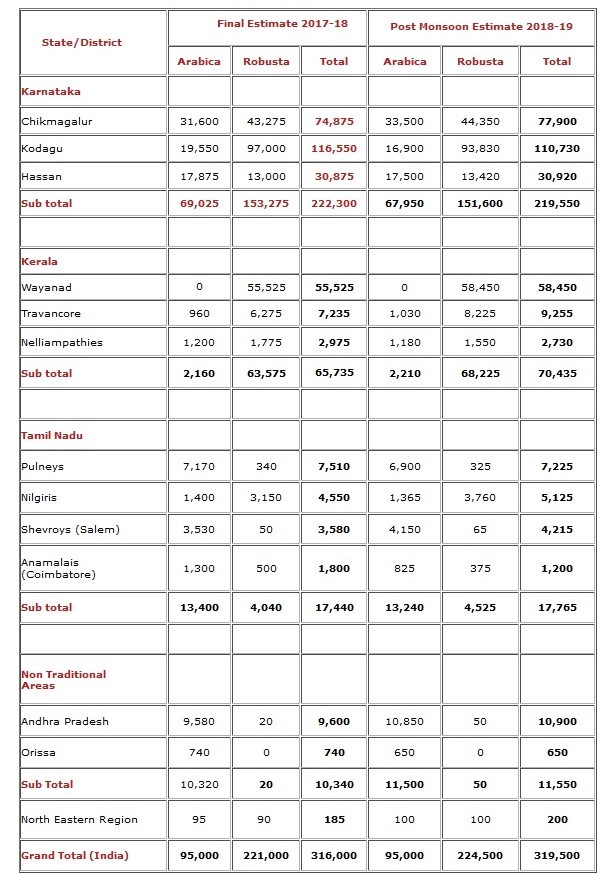 The major factors responsible for reduction in post monsoon production estimates of 2018-19 in Karnataka and Kerala are that though the initial crop set was good with record post blossom stage estimate of over 3,80,000 MT, but from early July, 2018 onwards, continuous heavy rainfall with severe intensity has been witnessed especially in coffee areas of Karnataka and Kerala.

More importantly, severe to very severe rainfall occurred during the month of August 2018 in the coffee growing districts of Karnataka and Kerala, especially in the heavy rainfall zones, leading to substantial crop losses, flooding and landslides.

It is evident that in all the major coffee growing areas of Karnataka and Kerala, there is an excess rainfall of 46% to 98% during the period Jan-Sept 2018 in comparison to the rainfall received during the corresponding period of the previous year 2017.

The continuous rains led to soil saturation and wet feet conditions resulting in defoliation, berry drop and incidences of stalk rot and black rot. Uprooting of shade trees as well as landslides have also damaged the crop. This severe to very severe intensity rains which occurred during August 2018 has caused unprecedented flooding and landslides in coffee areas affecting the coffee plantations, estate infrastructure and road and communication network.