ABIDJAN, Côte d’Ivoire — This review of the cocoa market situation reports on the prices of the nearby futures contracts listed on ICE Europe (London) and U.S. (New York) during the month of March 2019. It aims to highlight key insights on expected market developments and the effect of the exchange rates on the US-denominated prices.

Chart I shows the development of the futures prices on the London and New York markets at the London closing time. Both prices are expressed in US dollars. African origins are priced at par with the London market, whereas they receive a premium of US$160 per tonne over the New York price.

Any departure from this expected price equilibrium is due to the differences in the size and composition of tenderable cocoa stocks in London and New York as well as their certifications rules. Chart II depicts the change in the ICCO daily price index and the US dollar index in March.

By comparing these two developments, one can extricate the impact of the US dollar exchange rate on the development of the US dollar-denominated ICCO daily price index. Finally, Chart III illustrates monthly averages of cocoa butter and powder prices in Europe and the United States since the beginning of the 2018/19 cocoa year. 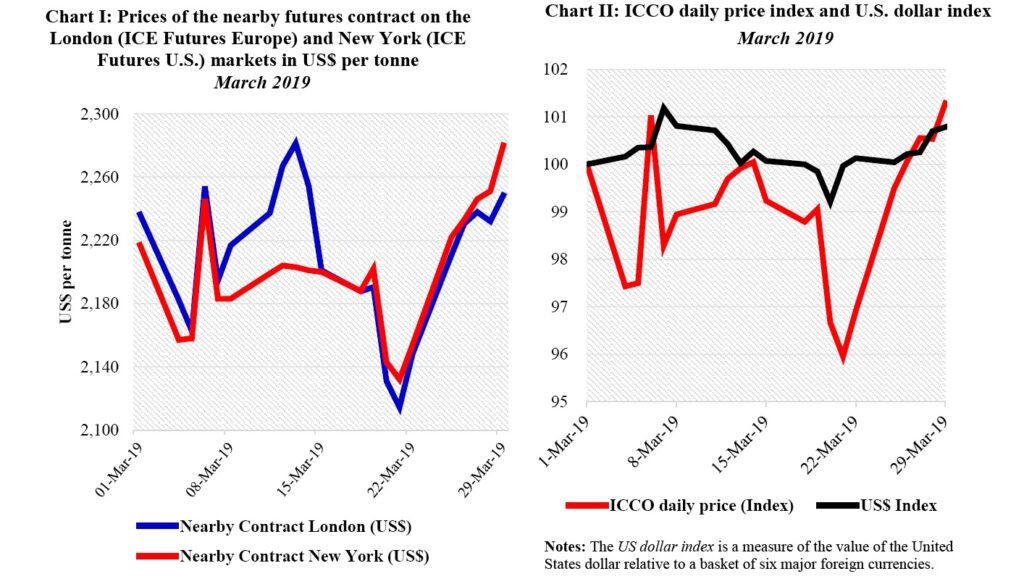 During the first two trading weeks of the month, prices generally followed a bullish stance despite the initial fall recorded at the beginning of the considered period. The short-lived fall in prices was a reaction to the publication of data showing ample supplies of cocoa beans from Côte d’Ivoire. Warmer and drier climate conditions prevailing later on in West Africa led to a spike of 2% in prices in both London and New York.

The isolated rise in London prices during the period 7-13 March was due to the immediate unavailability of tenderable cocoa beans to be delivered against the March contract set to expire on 14 March.

Throughout the third trading week of the month under review, prices reverted from their increase and plummeted sharply to US$2,114 per tonne in London and US$2,132 per tonne in New York. The bearish stance on prices was due to views of a strong main crop output from top West African cocoa suppliers.

Ultimately, the strengthening of the US dollar – by nearly 1% – during the month of March had a weak impact on the boost observed in the US-denominated cocoa price (Chart II). 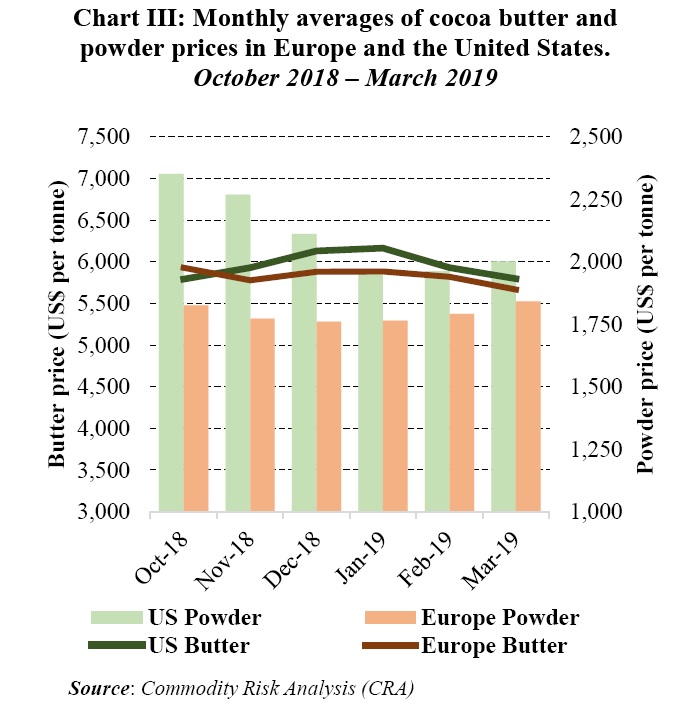 As shown in Chart III, although cocoa butter prices in Europe and the United States moved in opposite ways during October and November 2018, they declined starting from December 2018 onwards. In particular, cocoa butter prices retreated by 4% from US$5,929 to US$5,667 per tonne in Europe, while in the United States the contraction rate stood at 0.1%, moving prices from US$5,792 to US$5,798 per tonne.

In Côte d’Ivoire, the mid-crop started in April with the Government’s decision to maintain the farm gate price at CFA750 (US$1.29) per kilogram of cocoa beans; the same price as the main crop. As at 21 April 2019, cumulative cocoa arrivals at Ivorian ports for the 2018/19 crop year were estimated at 1.803 million tonnes, up by 14% from 1.580 million tonnes recorded over the same period last season.

According to the Ghana Cocoa Board, the country’s cocoa beans production for 2018/19 is expected to weaken compared to the level reached the previous season because of cocoa-related diseases and dry weather. However, cocoa purchases were seen at 698,553 tonnes over the period 1 October 2018-4 April 2019, up from 657,604 tonnes recorded over the period 1 October 2017-12 April 2018.

Despite the strong tensions in Cameroon’s Anglophone regions; which represent the main cocoa belt in the country, cumulative arrivals of cocoa beans at the port of Douala attained 250,000 tonnes by 28 February 2019, up by 19% from the 210,000 tonnes seen for the same period of the previous season.

Grindings data released for the first quarter of 2019 by regional cocoa associations showed an increase in the year-on-year demand worldwide. Indeed, in Africa, data published by the exporters’ association (GEPEX) showed that Côte d’Ivoire’s grindings had reached 268,000 tonnes since the start of the 2018/19 crop season, up from 254,000 tonnes recorded over the same period last year.

Production and export of coffee in Ecuador continue their drastic decl...