This review of the cocoa market situation reports on the prices of the nearby futures contracts listed on ICE U.S. (New York) and ICE Europe (London) during the month of August 2018.

It aims to highlight key insights on expected market developments and the effect of the United States dollar exchange rates on cocoa prices.

Chart I shows the developments of futures prices on the London and New York markets at the London closing time. Both prices are expressed in US dollars.

Any departure from this price configuration provides indication on the relative, expected availability of cocoa beans at the delivery points, designated by the exchange, at contract expiration.

Chart II depicts the change in the ICCO daily price Index and the US dollar Index in August.

Finally, Chart III illustrates the weekly differential in the nearby futures contract prices between the London (ICE Futures Europe) and New York (ICE Futures U.S.) markets in US$/tonne since the 2017/18 crop season started. 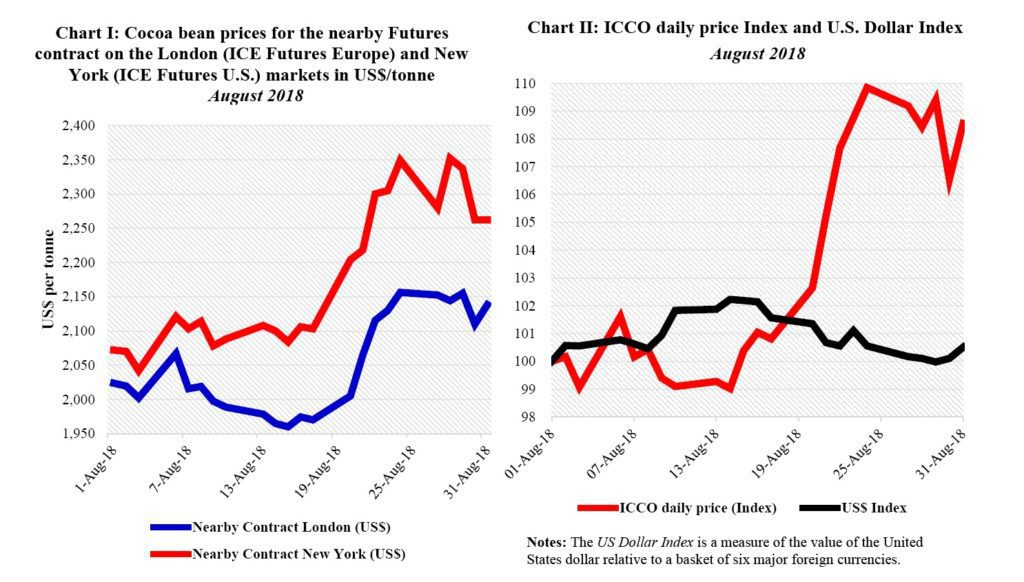 Cocoa futures prices generally soared on both the London and New York markets in August as a response to the decline in cumulative arrivals at the main Ivorian ports coupled with the ongoing political unrest in Cameroon’s main cocoa-producing Southwest region.

During the course of the period being reviewed, the nearby contract traded higher in New York compared to London. Indeed, prices averaged US$2,050/tonne and US$2,176/tonne in London and New York respectively.

During the first trading week of August, futures prices increased on both markets and settled at US$2,067/tonne and US$2,121/tonne in London and New York respectively. Thereafter, prices in London diminished while they firmed slightly in New York by the end of the second week of the month being reviewed.

Compared to their values at the beginning of the month, futures prices sank by 3% to US$1,960/tonne by mid-August in London. On the order hand, they gained 1% at US$2,084 /tonne in New York over the same period.

However, the dwindling in London prices was short-lived and the following trading sessions saw prices rally on both markets in reaction to low year-on-year cumulative arrivals of cocoa beans recorded in Côte d’Ivoire’s ports.

In addition, news indicating that the political conflict in Cameroon impacted harshly on the volume of cocoa production from the top producing Southwestern region partly supported the bullish stance on prices. Consequently, prices perked up to their highest level for the month at US$2,156/tonne in London and in US$2,176/tonne in New York.

As shown in Chart II, the US dollar index remained stable in August while the ICCO daily price index strengthened by 9% from its value displayed at the beginning of the month. Thus, the exchange rate market did not play any role in this price development.

As mentioned in the introductory part of the current market review, under normal market conditions, London prices should be higher than the New York ones. However, during August, futures contracts traded stronger in New York compared to London.

Indeed, the dramatic differential in cocoa prices between New York and London (Chart III) could be supported by the decline in the stock of cocoa beans in the United States by the end of the monthunder review. 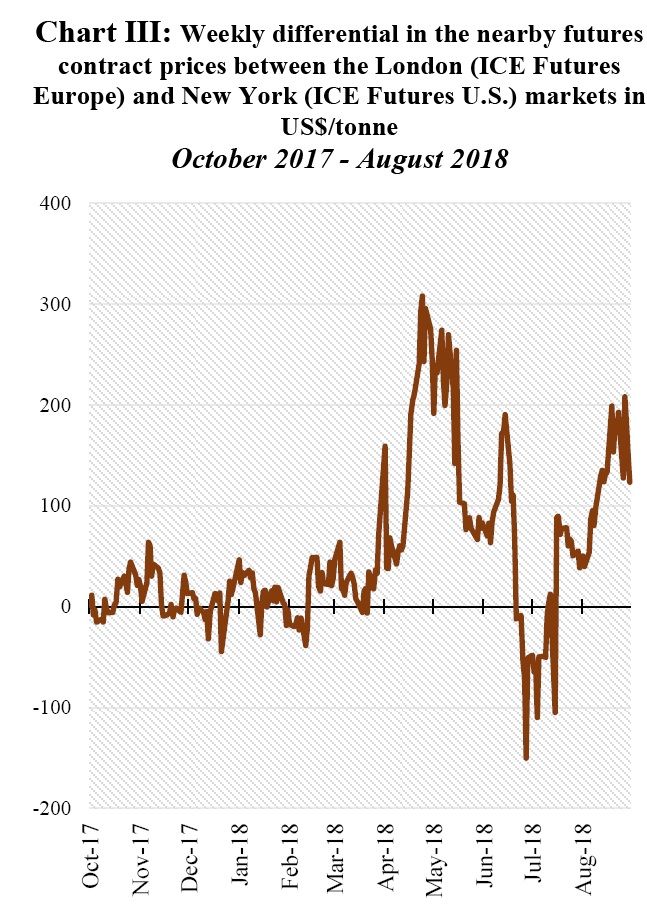 Cocoa production from the two top growers plays a significant role in the price movements described in the first part of this document.

Thus, news agency reports indicate that, cumulative port arrivals in Côte d’Ivoire since the start of the cocoa season were seen at 1.848 million tonnes by 9 September 2018, down from 2.007 million tonnes recorded at the same period last season.

In its latest release of the Quarterly Bulletin of Cocoa Statistics, the ICCO Secretariat published that world cocoa production for the current season is expected to decrease by 2% to 4.645 million tonnes, as compared with the previous season’s estimate of 4.739 million tonnes.

Regarding demand, a 4% growth to 4.568 million tonnes, in world grindings, is anticipated for the current season compared to the last crop year.

Barry Callebaut will use cocoa shells to biochar, agriculture’s ...

Drinking cocoa can make you smarter, says a research of the University...