Cocoa Market Report: Certified stocks on the rise on either side of the Atlantic

Prices of the nearby cocoa futures contract averaged US$2,195 per tonne and ranged between US$2,122 and US$2,295 per tonne in London whereas in New York, average price of the first position contract stood at US$2,332 per tonne, seesawing between US$2,242 and US$2,425 per tonne. In Europe, 7,960 tonnes of cocoa beans were exchanged against the JUL-21 contract, down from the 9,280 tonnes tendered against the JUL-20 one. Certified stocks in exchange licensed warehouses kept on climbing on either side of the Atlantic. Cocoa graded on the exchange increased year-on-year by 17,100 tonnes to 136,800 tonnes in Europe and by 79,133 tonnes to 95,487 tonnes in the United States. Origin differentials continued to weaken year-over-year in July in both Europe and the United States. Declining cocoa beans prices on futures markets upheld the bolstering effect on cocoa powder prices and exerted downward pressure on prices of cocoa butter. Grindings data posted by main regional cocoa associations for the second quarter of 2021 indicated resumption in cocoa processing activities in Europe, Asia, and North America.

ABIDJAN, Côte d’Ivoire – The movements of cocoa futures prices for the month under review, concentrate on the July-2021 (JUL-21) and September-2021 (SEP-21) futures contracts as listed on ICE Futures Europe (London) and ICE Futures U.S. (New York). It aims to provide insights on the price developments for these two specific futures contracts.

Figure 1 shows price movements on the London and New York futures markets respectively at the London closing time in July 2021, while Figure 2 presents similar information for the previous year.

Before the JUL-21 contract reached its maturity date of 15 July, both the London and New York markets were in contango (Figure 1). 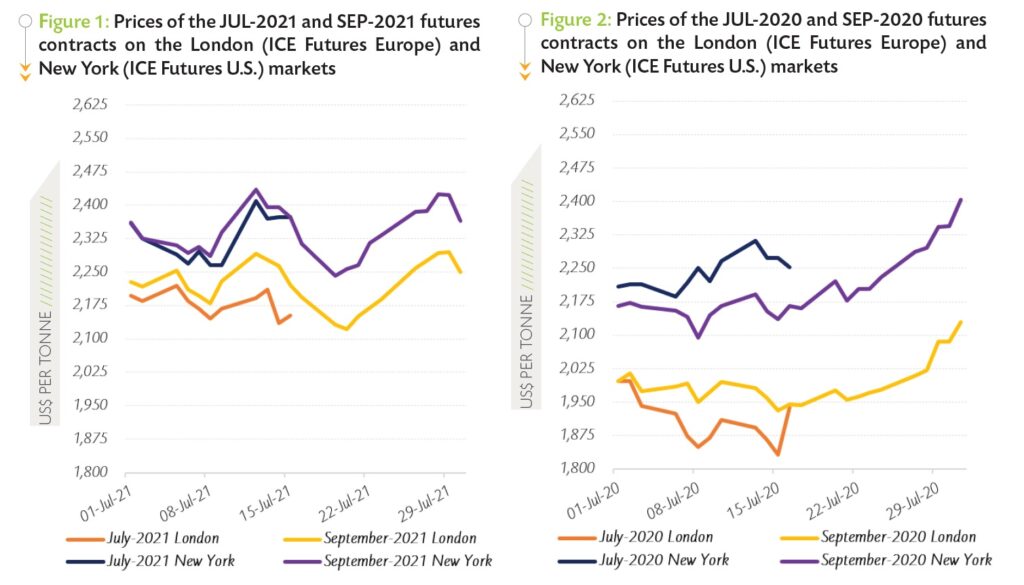 Back in July 2020, Figure 2 illustrates that the London market was in contango whilst the New York one was in backwardation. At the time, certified stocks with valid certificate represented 68% of total stocks held in exchange licensed warehouses in Europe. In the United States, the share of certified stocks in total stocks in exchange licensed warehouses was marginal (3%).

The nearby cocoa contract (JUL-21) prices witnessed three distinct sequences during July. Despite the initial price decline that occurred in the course of the first trading week of the reviewed month (1-8 July) on both markets, prices firmed in New York to reach a 6-week high on 12 July; settling at US$2,410 per tonne. Concurrently in London, they remain virtually flat at US$2,192 per tonne. Over this period, news agencies reported that, the US chocolate industry expanded processing by 1.8% during 2020 when the COVID-19 pandemic reached unprecedent peaks; hence boosting the optimism for demand for cocoa products.

However, moving on to 13-20 July, prices plunged by 4% from US$2,211 to US$2,122 per tonne and by 5% from US$2,370 per to US$2,256 per tonne in London and New York respectively. The renewal of lockdowns in Asia and some European countries, to tackle the rapidly spreading delta variant of the COVID-19, which could be detrimental to the global economy and thereby the cocoa industry took a toll on cocoa prices.

During 21-30 July, prices halted from their descent and strengthened on both markets in reaction to the robust increases recorded in grindings in main cocoa consuming regions namely Europe, Asia and North America. In London, prices of the SEP-21 contract were reinvigorated by 5% from US$2,150 to US$2,250 per tonne while in New York, prices of the nearby cocoa contract went up by 4% from US$2,265 to US$2,365 per tonne.

Stocks of cocoa beans with valid certificates in European warehouses averaged 136,160 tonnes; representing 78% of the total stocks. As shown in Figure 3, stocks with valid certificates increased by 16% as compared to their average level of 117,453 tonnes seen in July 2020. In the United States, total stocks climbed by 42% year-on-year to reach an average of 376,494 tonnes in July 2021 (Figure 4). Over the same period, certified stocks in the United States climbed from 6,961 tonnes to 46,009 tonnes. 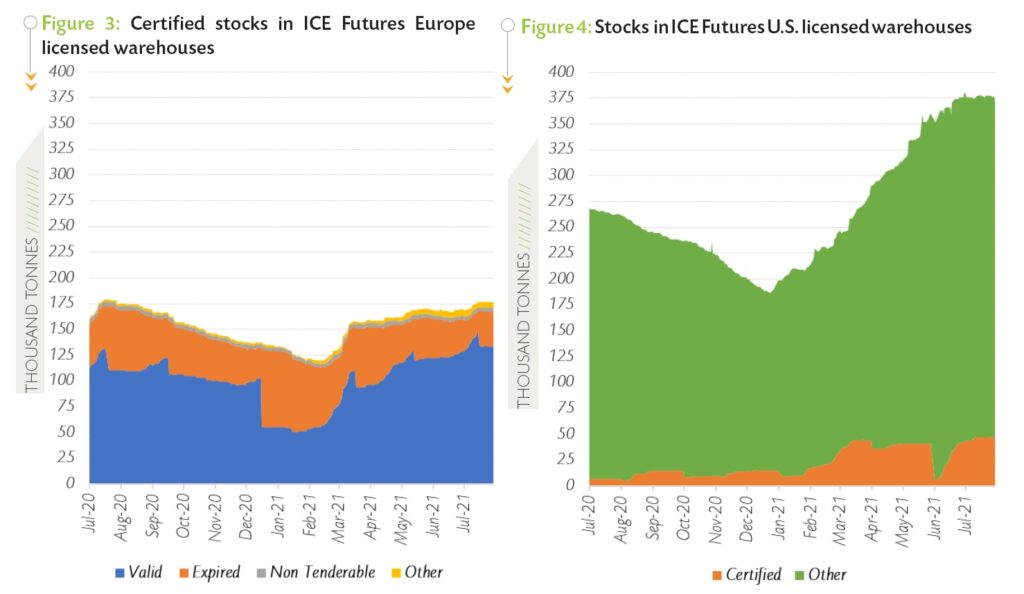 Cocoa graded by the ICE Futures Europe, during October 2020 – July 2021, reached 136,800 tonnes, up by 14% from 119,700 tonnes of cocoa graded over the same period in the previous season. During the aforementioned periods, the volume of Cameroonian cocoa beans at exchange gradings was slashed from 55,000 tonnes to 43,200 tonnes.

In July the entire volume (9,989 tonnes) of cocoa graded on the ICE Futures U.S. originated from Côte d’Ivoire. Total gradings amounted to 95,487 tonnes of cocoa beans during October 2020 – July 2021, up from 16,354 tonnes graded during the same period of the preceding cocoa year. On a year-on-year basis, the volumes of cocoa beans from Côte d’Ivoire and Ecuador in ICE Futures U.S. gradings increased from 8,699 tonnes to 53,762 tonnes and from 1,169 tonnes to 15,311 tonnes respectively. 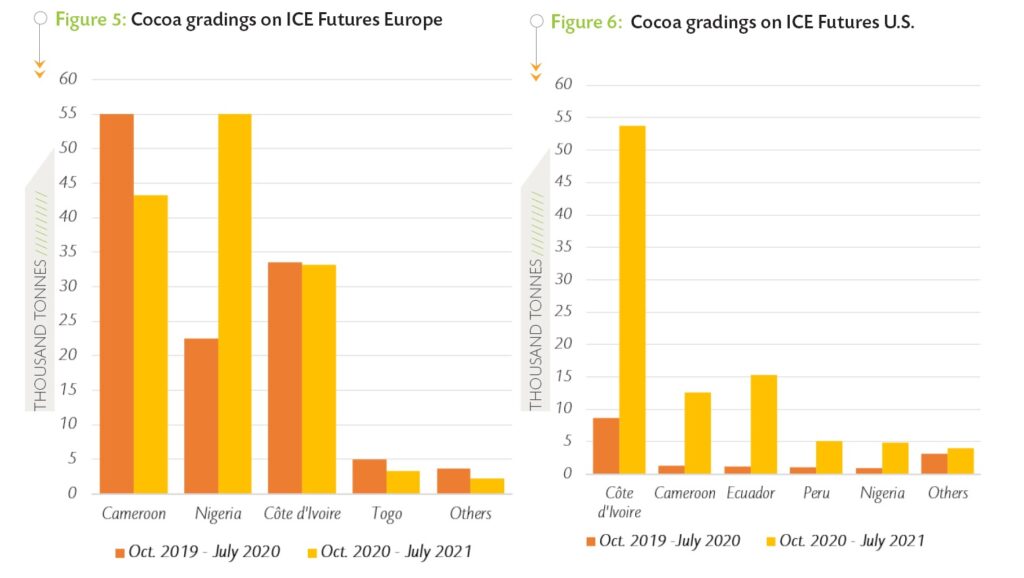 Figure 7 and Figure 8 provide evidence that origin differentials on prices of the six-month forward cocoa contract in Europe and the United States for Ghana, Côte d’Ivoire, Ecuador and Nigeria witnessed pronounced declines in July as compared to their levels recorded at the beginning of the 2020/21 cocoa year. 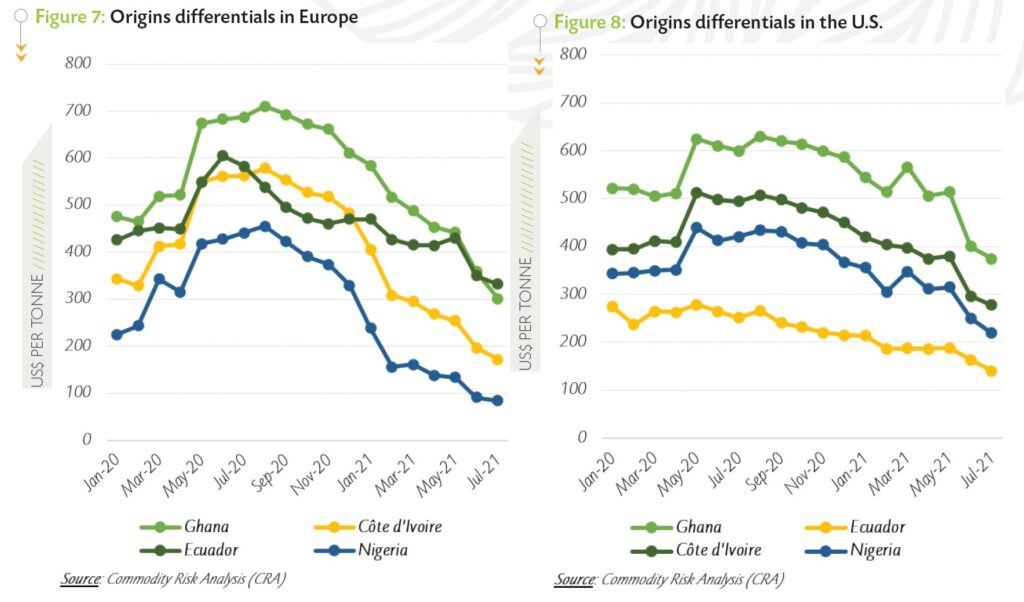 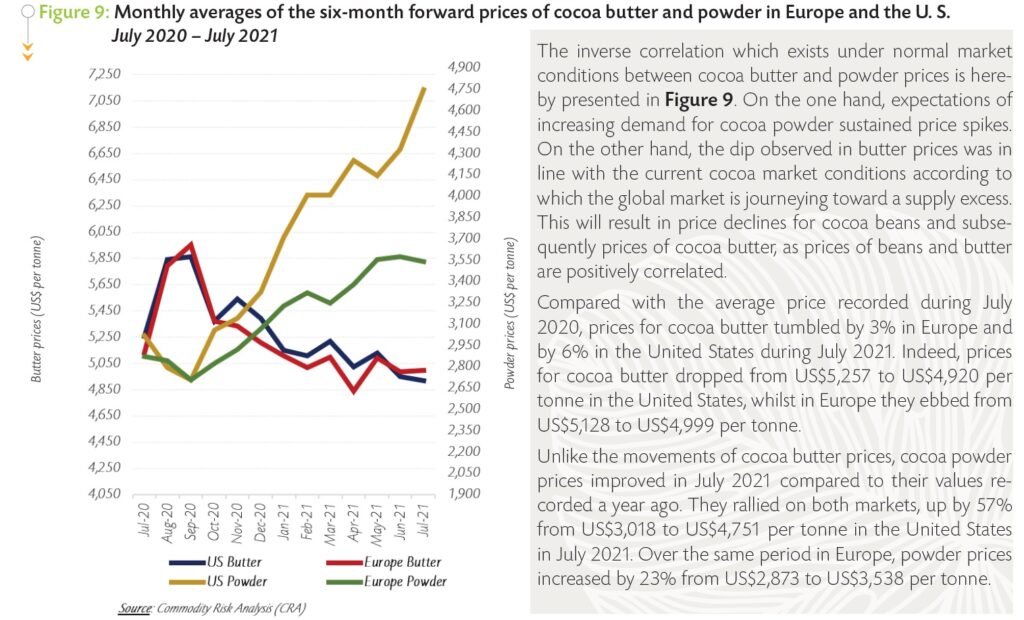 Since the start of the 2020/21 cocoa season, cumulative arrivals of cocoa beans in Côte d’Ivoire are higher year-onyear. As at 8 August 2021, cumulative arrivals at Ivorian ports were seen at 2.111 million tonnes, up by 4.8% compared to 2.014 million tonnes recorded a year earlier. In addition, the country was reported to have sold exports contracts of 1.4 million tonnes of cocoa beans for 2021/22, which represent 93% of the 1.6 million tonnes targeted to be sold by end September 2021. These contracts were sold at a discount of £150 per tonne; £50 per tonne lower compared to the discount applied to exports contracts of the 2020/21 cocoa year.

In July, data published by main regional cocoa associations for the second quarter of 2021 indicated that grindings substantially increase in Europe, South-East Asia and North America. Figure 10 shows that the European Cocoa Association (ECA) published data indicate a year-on-year soar of 13.61% from 314,108 tonnes to 356,854 tonnes in grindings.

In a similar vein, the Cocoa Association of Asia (CAA) announced a year-on-year increase of 8.98% from 202,674 tonnes to 220,865 tonnes. Further, processing activities improved in North America during the second quarter of 2021 with the National Confectioners’ Association (NCA) reporting a 11.68% increase from 110,776 tonnes to 123,719 tonnes of cocoa beans grinded.

At the end of the third quarter of the 2020/21 cocoa season, cumulative grindings of ECA members totaled 1,058,820 tonnes, up by 20,577 tonnes from the level reach at the corresponding period of the previous season. In South-East Asia, cumulative grindings increased by 2% year-on-year to 652,269 tonnes over the first three quarters of 2020/21. 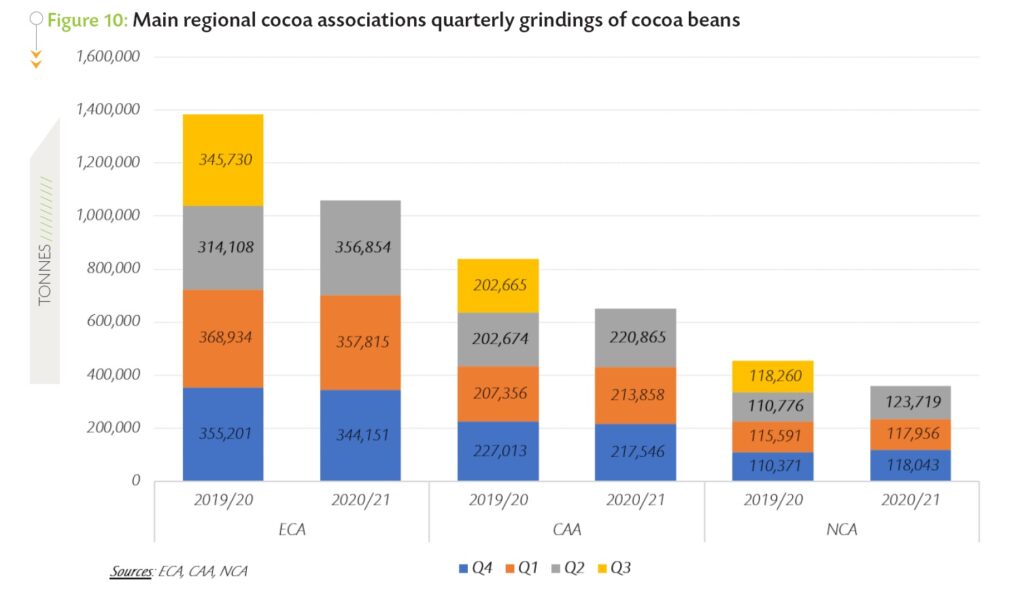