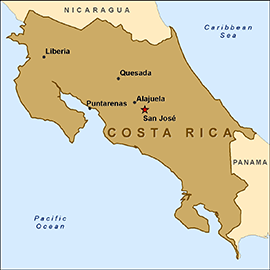 The Costa Rican coffee industry is set to get a boost in funding to go towards improved farming practises and techniques, benefitting around 800 farmers in the Central American nation.

Developed by four government agencies alongside the Inter-American Development Bank (IADB), a 2.5 year plan will rolled out that will channel money towards an number of initiatives that will should help the growers of Costa Rica produce coffee more efficiently.

It is also expected that the measures will in turn bring around extra profits.

The domestic agencies partaking in the scheme – and providing funds – are the Agriculture and Livestock Ministry, the local Environmental Ministry, Costa Rica’s Coffee Institute and the Cooperative Fund for Sustainable Development.

However, the IADB’s Investment Fund will be providing the majority of the US$1.99m subsidy.

Verbosely titled the “Project for the Promotion of Green Growth and Low Carbon in Costa Rica’s Coffee Sector,” small schemes will initially launch to allow experts to determine which practises are best suited. From these first results, specific recommendations can be made to specific coffee farmers.

One major component is to encourage more people to adopt the shade grown approach to growing their coffee. Recently, scientists based at the University of Würzburg concluded a study that found harvests from under-shade plantations produced a 10% larger yield during harvests and that if pollinators were to be thriving, coffee cherries would be of a noticeably better quality.

A similar scheme, though one motivated by conservation, has been adopted in Puerto Rico.

Money will also be used to help the sector implement low-carbon technology, with areas of focus being on the reduction of fertilisers and the improvement of coffee drying ovens which will make them more energy efficient.