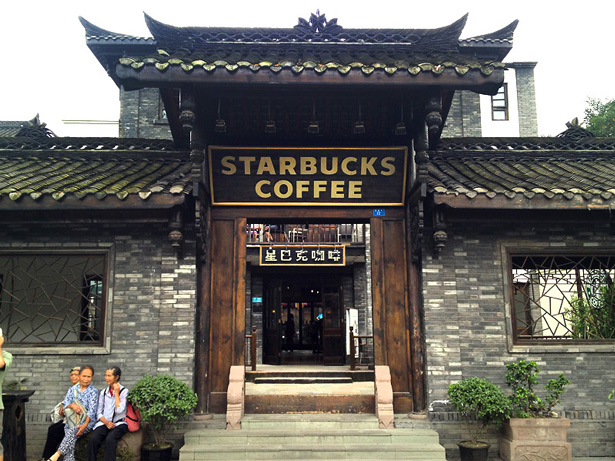 Yunnan province is a microcosm of the intertwined natural resource challenges facing China. Dams, development, deforestation, drought, and climate change threaten China’s most biodiverse province – all while it increases its exports of agricultural products and electricity to China’s coastal provinces.

These competing demands bring into question the sustainability of China’s development paradigm and the country’s environmental security.

For Yunnan, a partial solution to this knot of choke points may lie with its nascent coffee industry. Starbucks is the face of the coffee boom in Yunnan, and their Coffee and Farm Equity Practices(C.A.F.E.) could offer farmers the tools they need to adapt to changes while simultaneously reducing their own input to environmental stresses.

Although coffee cultivation is but a drop in the bucket in terms of Yunnan’s overall agricultural production, the province produces 98 percent of all Chinese coffee. Between 2008 and 2011, the land area used for coffee in Pu’er county, which produces 60 percent of Yunnan’s coffee, doubled from 14,000 hectares to 28,000. That number is expected to double again by 2015.

Despite this remarkable growth, demand has outstripped supply. Over the same period, coffee beanprices have doubled, rising from 16 yuan a kilogram to 30. These high prices give farmers incentive to switch from tea to coffee cultivation and clear forested areas for new production.

While certainly good for Chinese coffee drinkers, there are questions about the environmental sustainability of Yunnan’s coffee boom. Most of the coffee grown in Yunnan is sun grown, which requires more chemical fertilizers than shade grown coffee to achieve similar yields. Coffee cultivation is also very water intensive, and Yunnan’s ongoing four-year drought could threaten future yields.

Notably, Starbucks only purchases shade-grown coffee, which underscores the potentially large environmental benefits of the company’s program to promote sustainable coffee farming in the province.

Starbucks first opened coffee houses in Mainland China in 1999, but it was not until 2006 that they considered sourcing coffee beans from China.

Since then, Starbucks has been working with local governments, firms, and the Yunnan Academy of Agricultural Science (YAAS) to expand its coffee production, increase quality, and improve sustainability.

In 2010, Starbucks signed an agreement with YAAS and the Pu’er city government to establish its first coffee bean farm in the region. In addition, the agreement included plans for a coffee development center, a farmer support center, and coffee processing centers.

In 2011, Starbucks set up a local joint venture with Ai Ni Group – an established coffee operator and agricultural company in Yunnan – to expand its coffee sourcing network in the region and to more fully implement “best practice” coffee processing methods. In December 2012, the Starbucks Farmer Support Center officially opened in Pu’er.

Growing and processing coffee is surprisingly water intensive. According to a study by scientists from the University of Twente, the full economic cost of an average cup of coffee in the Netherlands is 140 liters of water. Well aware of coffee’s water intensity and other problems associated with coffee cultivation in the developing world, Starbucks began implementing a set of environmental, social, and economic guidelines in 2004 to source ethically produced coffee globally. Called the Coffee and Farm Equity Practices(C.A.F.E.) and introduced in 2011, these standards include water conservation measures in growing and processing and require proper waste-water disposal techniques.

Since Starbucks began operating in Yunnan, it has been slowly encouraging its local suppliers to follow C.A.F.E. Practices and verified its first suppliers in 2011. While Starbucks has not commented on any further progress implementing C.A.F.E. Practices in Yunnan, the company has publicly stated that it hopes to source 100 percent of its coffee from C.A.F.E. verified farms by 2015.

According to Joanne Sonenshine at Conservation International, Starbucks’ partner in C.A.F.E. Practices, a consistent source of water makes it easier for farmers to stick to the standards and helps build resilience to climate change. More water means more shade trees. The trees improve soil quality, water retention, and crop yields while reducing the need for fertilizers, creating a small positive feedback loop.

One of the largest sources of water in Yunnan is the Mekong River.  According to International Rivers, there are 7 dams already built, 7 under construction, and at least 11 more being planned on this vital artery, including the newest (coming online just last September), tallest, and closest to Pu’er, the Nuozhadu hydroelectric station. By 2014, Nuozhadu will produce 23.9 billion kilowatts of electricity, two-thirds of which will be routed to Guangdong province through the West-East Energy Transfer Project.