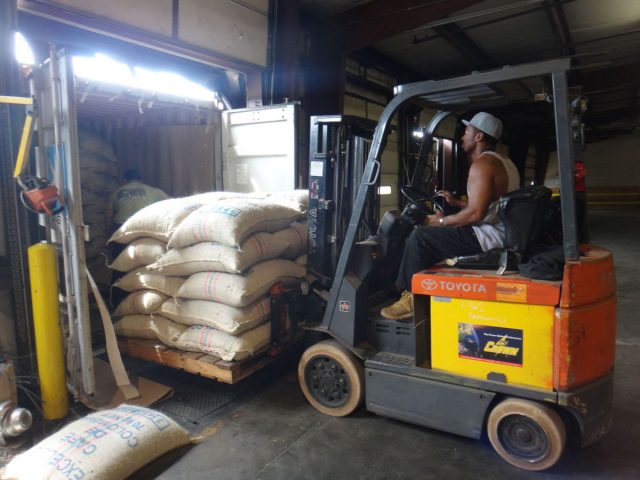 NEW YORK – There is enough coffee inside the Continental Terminals warehouses in Suffolk to keep someone awake for a lifetime.

Hundreds of 132-pound burlap bags of green beans are stacked high on pallets, and huge, one-ton “super sacks” sit clustered in a corner.

The company’s 69,000-square-foot Suffolk facility is a way station where raw product from South America, Central America and Hawaii waits for deals to be made. Eventually, every bean will get shipped somewhere else to be roasted, ground and brewed into the stuff that keeps America wired and working.

Until then, Larry Ewan and Steven Guido keep an eye on them.

“Coffee consumption doesn’t go down,” Guido said. “It goes up because the world wants it hot and black.”

Here at Continental Terminals, both men work at what has become Hampton Roads’ “coffee crossroads.” The New Jersey-based company is a leading warehouser and transporter of green coffee beans for regional, national and international roasters. They handle millions of pounds of coffee imported from all over the world.

“The Port of Virginia is like a funnel for this business,” Ewan said.

In Suffolk and Chesapeake, Continental has about 449,000-square feet of warehouse capacity. Although they use some of that space for storing other commodities such as aluminum ingots and raw rubber, coffee constitutes 75 percent of their business.

These days, because summer is a slow time of year, there is plenty of walking room in the warehouse.

But Ewan and Guido don’t expect that empty space to stay empty for long.

On Sept. 1, the Port of Virginia will be officially certified as a delivery point on the Intercontinental Exchange Futures U.S. Coffee “C” futures contract. The special commodity designation allows owners of exchange-graded coffee imports coming to Virginia and stored in local, exchange-licensed warehouses to be delivered against the “C” contract.

Prior to this designation, the only domestic delivery points for coffee that could be traded in the “C” futures contract were New York, Miami, New Orleans and Houston. According to a release from the Port of Virginia, the coffee “C” futures contract is “the world benchmark for Arabica coffee.”

What does this mean for the Hampton Roads coffee industry?

Continental Terminals Inc. hopes that it translates into an increase in the amount of coffee coming into the Port of Virginia.

What will it take to really move the needle?

“It depends on a [green coffee importing] company like Rothfos, Coffee America or RCMA to take a position and say, ‘We’re going to position 200,000 bags of coffee in Virginia,’” Guido said.

Guido said that Hampton Roads is still low on coffee compared to other ports. The area can boast as many as 500,000 bags on hand, but recent numbers from New York/New Jersey showed close to 1.6 million bags.

“But we have more roasters,” Guido said. “There are no major roasters within 75 miles of the Port of New York. It’s only a matter of time before that volume starts to shift.”

That proximity to big-name roasters is what has helped percolate the local coffee economy.

The release from the Port of Virginia stated that while several other ports were in the running for the “C” futures designation, Virginia won partly due to its proximity to coffee-related businesses.

“You’ve got some of the largest brands and companies in the industry right here,” said Brian Kubicki, vice president of marketing for Massimo Zanetti USA. “Folks who know coffee know that Hampton Roads is important.”

Massimo Zanetti USA is one of the country’s largest roasters, producing brands such as Chock Full O’ Nuts, Chase and Sanborn, and Hills Brothers. They sit adjacent to Continental Terminals’ Suffolk warehouse and next door to the J.M. Smuckers liquid coffee processing facility. Within 11 miles, Keurig Green Mountain operates a 330,00-square-foot roasting and packaging facility in Windsor.

“That gives us more roasters in a 100-mile radius than any place on the East Coast,” Ewan said. “Extend that radius to 300 miles, and you can include Landover [Eight O’Clock Coffee], S&D Coffee & Tea and Pontiac Foods [Kroger brands] … we can service all of them.”

If the trend of coffee activity continues, Continental is prepared for growth.

An engineer’s drawing pinned to a conference room wall showed plans for two 30,000 square-foot-expansions to the existing building in Suffolk. The city of Chesapeake also recently approved Continental’s site plan for an 80,000-square-foot expansion at its Chesapeake facility.

“We have the ability to expand another 180,000 square feet on our property before we go out and buy additional space,” Guido said.

“I think the coffee category is going to continue to see expanded growth, and I think that translates into good growth here,” Kubicki said. “We have some opportunity to grow in our existing location and have plans to realize that over the next five years.”