SINGAPORE –The Board of directors of Olam International Limited (the “Company“) wishes to announce a fiscal year-end change from June 30 to December 31.

The change will enable the Company to align its fiscal year to comply with the group consolidation and reporting requirements of its majority shareholder.

With this change, the Company’s current fiscal year, which began on July 1, 2014 will end on December 31, 2015. Thereafter, the Company will follow a January to December fiscal year.

The schedule for release of results is as follows (click to enlarge): 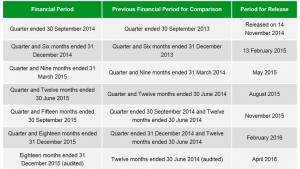 The next Annual General Meeting will be held no later than April 30, 2016.

In addition, to facilitate comparison with prior years, the Company will provide historical pro-forma financial information for financial years ended December 31, 2014, 2013, 2012, and 2011.