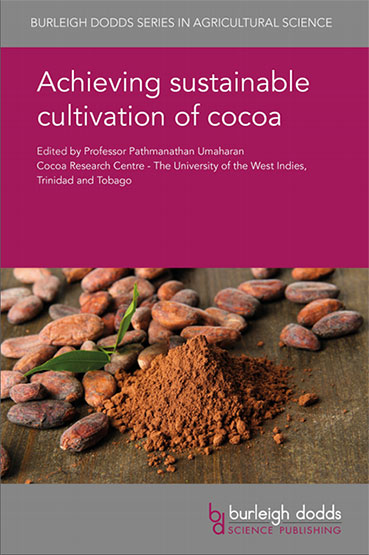 In August, with a distinguished editor and a variety of international experts as authors, Burleigh Dodds Science Publishing launched the book Achieving Sustainable Cultivation of cocoa, a publication that is considered a standard reference for scientists, producers, and producers of cocoa

As author and co-author of two chapters of this book appear Eduardo Somarriba and Wilbert Phillips, from the Agriculture, Livestock and Agroforestry Program (PRAGA) from CATIE (Tropical Agricultural Research and Higher Education Center)

According to Francis Dodds editorial   director of Burleigh Dodds Science Publishing, the book discusses the existing challenges in front of the need of making the cocoa crop  be more efficient and sustainable and supply the increasing  demand, but with an offer  depending on plantations every time older, with less performance and more vulnerability to illnesses. At the same time, that it should attend the increasing concern about the environmental impact of the cocoa crop in the soil’s health and biodiversity.

In its first part, the book makes a revision on the genetic resources and the development in production technologies.  The second part discusses the optimization of the crop techniques to take maximum advantage of the new varieties.  The third part summarizes the last researchers about the comprehension and fights against the main viral and fungal diseases that affect cocoa. The fourth part covers security and quality issues, and finally the last part of the book analyzes ways to improve sustainability, including the role of the agroforestry, the organic crop and ways to support small producers.

Somarriba and Philips participated with specific contributions in the first and fifth part of the book.  Phillips addressed the main challenges of conservation and exploiting of the cocoa genetic resources. While Somarriba treated the issue of the analysis and design of the shade canopy of cocoa based on agroforestry systems.

The book was edited by the recognized and cocoa expert, Pathmanathan Umahran, director of the Research Centre for Cocoa and professor of genetic at the University of the Occidental Indies, in Trinidad and Tobago.

Martin Gilmour, Director of Research and Sustainability Development of Cocoa in Mars Global Chocolate, communicated in a press release of Burleigh Dodds Science Publishing that this book should be of great interest for researchers,  development agencies, governments, specialists in the industry and non-government organizations, in conclusion for whoever is interested in improving the cocoa crop sustainability.

Two Italian importers explain how the coronavirus is worsening the cof...

Here is how Barry Callebaut is working to become carbon and forest pos...

Jamaica aims to deepen ties with Japan, which remains the largest market for its coffee