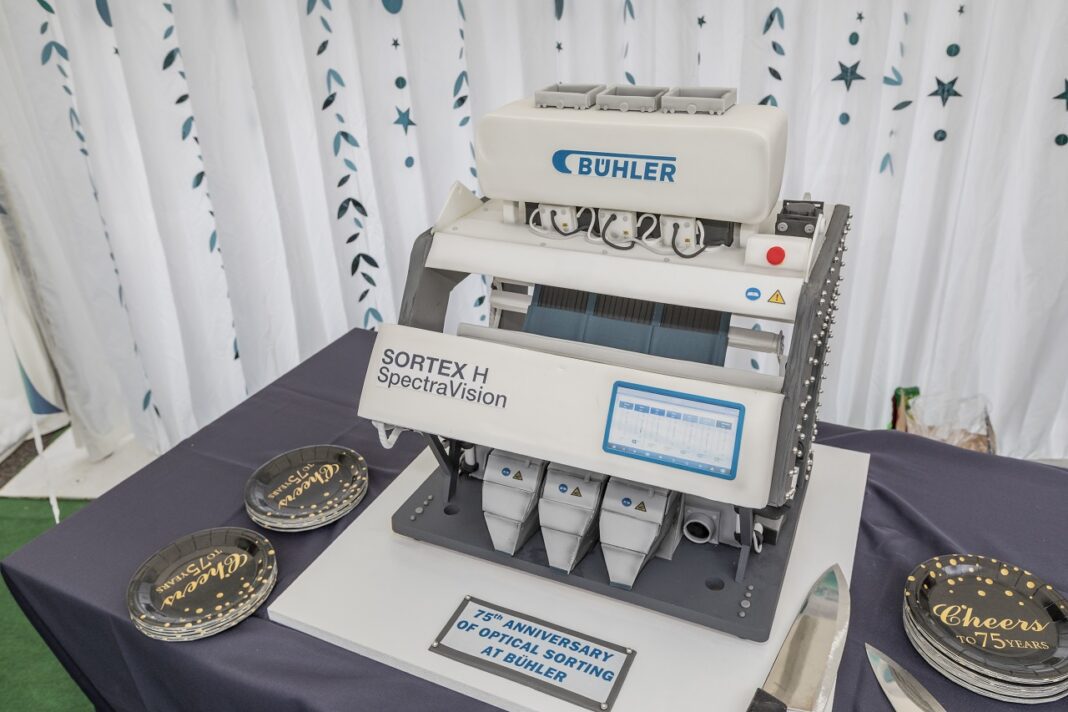 LONDON, UK – After 75 years of continuous innovation, SORTEX has marked the special occasion with a trip down memory lane – including recollections of the company’s origins, the first ever SORTEX optical sorter developed, and how SORTEX continues to put its customers first by responding to the latest trends and requirements, such as food safety, sustainability and digitalization.

Bühler Group, founded in 1860 – has been a pioneer in optical sorting since 1947. Through its processing technologies and machines located within customer factories, today Bühler has a hand in processing over 60% of the world’s grain and 30% of the world’s rice.

With a company-wide focus on sustainability, Bühler works tirelessly to achieve its goal of reducing energy, waste, and water by 50% in its customers’ value chains by 2025. As such, all SORTEX sorters have been designed to reduce food waste by minimizing the good to bad product ratio.

SORTEX also excels in sorting used plastic, which is key to improving the quality of materials for recycling. SORTEX equipment can separate PET from PVC, HDPE and other materials, making it possible to remake bottles and other products from uncontaminated recycled plastic. Bühler has collaborated with companies such as Coca-Cola to help them reach their goal of using more recycled plastic.

SORTEX sorters can sort through approximately 300 commodities within 13 different food and non-food segments. Having evolved from a UK-oriented company, SORTEX now has a far-reaching global footprint with development teams and production sites all over the world. With its headquarters based in a newly developed office space in East London, SORTEX is regarded as one of the most highly trusted technology providers for sorting solutions in the industry.

The start of something great

In May 1947, the Balint brothers – owners of Gunson Seeds – established a firm in the UK called Beno Balint and Sons Limited. The objective was to research and find a technological solution to speed up the laborious practice of manual handpicking of seeds. Dr. Okolicsanyi, a Hungarian scientist, and his assistant Herbert Fraenkel were given this assignment. Shortly after, fabrication of machines began in the Gunson Seeds warehouse.

The first sorter to be developed was the G1. Called Gunson’s SORTEX Electronic Separator, this was a machine which could separate undesirable, discolored or vari-colored products. The G1 could sort peas, beans, corn, small grains, coffee beans, nuts and other applications of similar size.

Melvyn Penna, Product Manager at Bühler states: “When we started out 75 years ago, sorting was not widely required. There was a requirement for oil seeds and agri seeds, in other words, the high value crops. But sorting was not as widely spread as it is today.”

He adds: “Capacity per hour on the original G1 sorter back in 1947 was 10 kg on oil seeds. Today, capacity of our sorters is 10,000 kg on oil seeds! In the last 75 years, our sorting capacity and accuracy, the number of application fields, and, consequently, the business, have all grown considerably.”

In 2002, SORTEX was catapulted into the limelight with the launch of its SORTEX Z machine. Since the time of its launch, approximately 6,000 machines have been sold across various countries, significantly contributing to the improvement of food safety around the world.

Alexander Proemer, Director Head of Business Unit SORTEX, adds: “For over a decade, we were adding more and more features to keep the SORTEX Z as up to date as possible, including shape recognition, shape sorting, infrared, modules, and InGaAs. We then opened new markets in nuts, fruits, and vegetables industries with the launch of our SORTEX F machine in 2014. With its stainless steel structure, the F machine is still the safest machine on the market in terms of food safety!”

A commitment to food safety

One of the main pillars behind SORTEX’s success is its commitment to ensuring food safety.
Food safety is vital. The World Health Organization states that eating contaminated food causes 420,000 deaths a year globally. Ensuring hygienic design at every stage of food processing can play a major role in reducing this risk. Not only does it help ensure food safety, it also increases productivity for processors by reducing cleaning and changeover time and the need for maintenance.

In addition to sustainability and food safety, Bühler maintains a strong focus on digitalization. SORTEX in particular is hugely invested in making its customers Industry 4.0 ready. Indeed, the company’s adoption of new technologies such as artificial intelligence and Internet of Things (IoT) has allowed processors to enjoy optimized business efficiency, reduction of waste, and increased capacity.

By turning machine and process data into valuable insights, SORTEX sorters are one step closer to becoming fully autonomous. This is a direct response by Bühler to the growing global challenges of skilled labor shortages, increased uncertainties in product availability and quality, as well as upcoming stricter regulations on product traceability.

“Bühler has always been at the forefront of innovation and our research and development teams are working on tomorrow’s innovations today,” says Carmen Schlatter Broger, Head of Business Area Digital Technologies.

SORTEX has won seven Queen’s Awards since 1968 for its various technological developments, most recently in recognition of its pioneering research into camera technology used in sorting machines. The Queen’s Award for Enterprise is the highest UK award for British businesses that have excelled in the fields of international trade, innovation, or sustainable development.

Indeed, Bühler SORTEX is relentless in its mission to set ever more technological milestones. This is evident from its latest development known as MerlinAi. MerlinAi is the new brain of Bühler’s SORTEX optical sorting machines. Its advanced multi-layer sorting algorithms ensure a consistently higher yield for processors, with less good product lost in the reject stream.

Sortex: Celebrating the people behind the brand

Broger concludes: “I would like to thank the people who have made SORTEX what it is today. In light of this, on June 9 we held an internal celebration at the Bühler London office to commemorate our 75th anniversary and the people who built this legacy that we are so proud of; the event was a great success. We all got together to enjoy live entertainment, games, tasty food, and an extremely impressive optical sorter cake replica!”

She adds: “Our SORTEX staff have weathered the challenging times of Covid-19, alongside the accompanying highs and lows of the business. Due to the passion, resilience, and endurance they’ve maintained, the brand is what it is today. We look forward to celebrating another 75 years of innovation and hope you will all join us in this exciting journey ahead!”