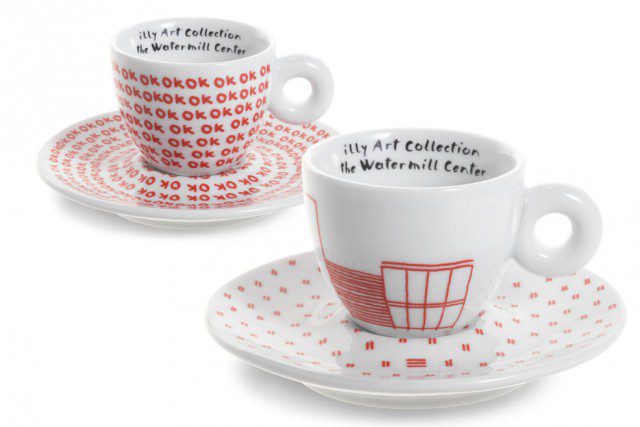 NEW YORK – illy has officially launch their collaboration with Robert Wilson, who has shaped the latest illy Art Collection with numbered and signed coffee cups. Inspiration for the collection comes from the Watermill Center, a laboratory for the arts and humanistic sciences founded by Robert Wilson in 1992.

The Watermill Center fosters research in the arts of the stage, providing young and emerging artists with a unique environment for creation and exploration in theater and all its related art forms, breaking with traditional forms of representation and developing democratic and cross-cultural approaches.

Christopher Knowles, Hope Esser, Willie Filkowski, Clo’e Floirat and Gintare Minelgaite are the artists who have collaborated with Robert Wilson to produce the new illy Art Collection. They were selected from among all those who participated in the Watermill Center’s annual International Summer Program, a laboratory for nearly 100 artists with at least 30 different nationalities.

The Watermill Center — the works it contains, its architecture and the very materials of which it is constructed – provides the creative catalyst for this illy Art Collection. Beyond the unmistakable Wilson “ok,” is the work of Clo’e Floirat and Gintare Minelgaite, inspired by the architecture of the Center. Willie Filkowski has worked using a technique usually applied to architectural elements (especially surfaces and stone).

Hope Esser has used the red wolf, a reference that recurs in the work of Robert Wilson at the Center. These elements modernize cups and saucers, transforming the coffee ritual into a creatively original taste experience.

Robert Wilson also has decorated coffee canisters for home use that, since 2006, have been designed by internationally known masters to accompany coffee cups in the illy artists’ collection. The new decorations are perfectly suited to the circular and vertical dimensions of the illy coffee can. Once the transparent film with commercial information is removed, the coffee can becomes a collector’s item.

The illy Art Collection, a series of coffee cups by artists that the Trieste-based company has produced since 1992, is the clearest expression of the illycaffe connection to contemporary art.

Some of the most prominent contemporary masters on the international art scene, along with emerging young talents, have transformed the everyday coffee cup – in this case the white porcelain lily cup introduced by the architect and designer Matteo Thun – into a cult object.

From Michelangelo Pistoletto to Marina Abramovic, Anish Kapoor to Daniel Buren, Robert Rauschenberg to Jeff Koons, Jan Fabre to James Rosenquist, Jannis Kounellis to Julian Schnabel, Louise Bourgeois to William Kentridge, more than 70 contemporary artists so far have contributed designs for the collection and formed close collaborative relationships with illy that develop along with their own artistic and cultural projects.