Aroma de Ron: All about the Colombian rum coffee and how it is made 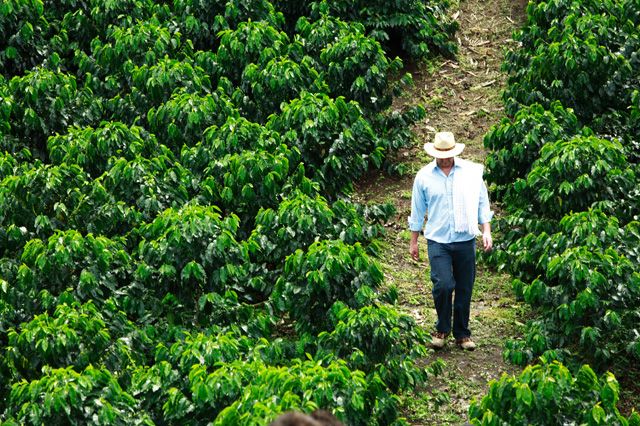 Working with markets increasingly hungry for novelty, requires us and encourages us to search for particular and innovative products. We have a moral duty to know to make known.

At a time when the media have made the distance much shorter, our task is to know what is happening in the coffee-producing countries to promote it then in the consumer countries with targeted actions that are nothing but the exchange of information and professionalism.

To carry out this activity, which for us has become a real mission, we are always around the countries of origin looking for new coffees to propose to the most curious roasters.

Among our countless and continuous research, we came across a very special coffee. It is a coffee we had already heard of but we had never been convinced of the real goodness until we saw it and then enjoyed it!

It is a coffee fermented in the barrels used to produce RUM, produced in Colombia

Nestled in the meandering Cordillera of the Andes, in the department of Caldas, at the foot of the imposing volcano “Nevado del Ruiz”, there is an area known as “Viejo Caldas”.

This area is considered one of the most important areas of cultivation of specialty coffee in Colombia, as well as one of the main areas of liquor production in the country.

After years of working in production of coffee and liquors, a great producer has decided to combine his two passions (Coffee and Rum) to embark on a journey full of experiments with varieties, methods, maturation times and temperatures … until to succeed in creating a unique fermentation method, which allowed the coffee to acquire the flavor and the taste of the Rum.

Features that are perceived from the first moment that smells the cup of coffee. We can say that this producer has combined all the elements in its favor to create the perfect mix.

Its coffee plantation is located between 1350 and 1470 meters above sea level, which allows for a balanced coffee. The volcano has positively influenced these lands which, thanks to its ashes, are rich in nutrients.

It was very difficult to “tap” the secrets of this preparation because as it is easy to imagine, the producer is very jealous of his unique processing method. However, we can say that it is characterized by a set of well-kept details.

Everything starts from the harvest, made by hand, grain by grain, selecting only cherries at the right degree of ripeness. The specific color of cherries must be purple, and although in Colombia harvesting takes place practically all over the year, coffee “suitable” for this type of preparation is collected only at certain period.

The processing can be defined as “normal” even if during fermentation it is necessary to monitor both fermentation and drying times at the silo and once the desired humidity level has been reached, the natural drying is carried out on “African beds”.

Finally, after selecting the largest sieves, the coffee is silted in oak barrels (100% Colombian!), which have been contained for at least 8 previous years, tafia of rum for aging. The coffee rests in these barrels for about 3 months.

Approximately every 20 days a small sample is taken for analysis, with the sole objective of achieving the desired result: a coffee with aroma and taste of rum.

The coffee obtained is then removed from the barrels and placed under vacuum, in 24 kg bags, so that the characteristics obtained are not lost.

An absolutely unique coffee, with an emerald green color. The green emanates an intense but soft aroma of alcohol; the cup, decidedly sweet, is balanced by a not excessive acidity with clear notes of rum in the aroma and also of raisins in taste.

The current production of this coffee is about 500 kg every 5 months but potentially it could reach 5,000 kg.

Several Q-graders in origin declined our invitation to “classify” this coffee due to the particular notes that are not typical of coffee. In general, however, we can say that the best performance of this coffee is obtained with espresso, cappuccino and caffellatte.