TRIESTE, Italy – From 25 to 27 October Amigos Caffè will take part in the ninth edition of TriestEspresso Expo (Hall 28, Stand 30-42), an eagerly awaited event for the international coffee industry, to present “7 Origini”, its latest 100% Arabica blend designed for the catering sector, which follows the product innovation trend of the Trieste-based roasting company both in terms of image and range.

After having dedicated its latest efforts to the creation of a reserve blend in memory of its founder Severino Mingardi, today the company looks to the future with the aim of satisfying a market that requires products with increasingly refined flavours.

On the TriestEspresso Expo stand, it will in fact be possible to taste the top blends MIngardi S and Qualità Extra Bar, as well as the latest addition, 7 Origini, which is about to surprise even the most sophisticated of palates.

Struck by the enthusiasm experienced at the HostMilano fair for Il Mingardi S, at the end of 2017 the Amigos management began to develop a new 100% Arabica blend that, unlike the one already available for large-scale distribution, was aimed at the catering sector.

In this way, Claudio Pribetic, undertook a long journey in search of the perfect blend and after months of tasting in the laboratory, in the early summer the result did not seem to disappoint him, but he was not yet completely convinced.

And in fact, the product that Pribetic had in mind for quite some time, only materialised by adding the seventh origin.

The result was “7 origini”, a 100% full-bodied Arabica with an impact, not easily attributable to blends of this type, to be enjoyed by adding a teaspoon of sugar to fully savour its fruity taste.

“Unlike normal Arabicas, this blend is characterised by a full body and a strong, intense taste without bitter aftertaste,” explains Claudio Pribetic. “It hits the spot from the very first sip, releasing on the palate all the aromas of the individual origins of which it is made up”.

In a new direction

“To embody the refinement and value of a 100% Arabica blend with 7 different origins, says Arianna Mingardi, we have relied on white and black satin packaging, which makes the glossy black logo and descriptions pop.”

Therefore, the introduction of “7 origini” marks the beginning of a turning point for Amigos Caffè which, whilst still maintaining its tradition, looks to the future to increasingly meet Italian and international market demands.

The story of Amigos Caffè (www.amigoscaffe.com) began in 1980 in a small 40-m² warehouse on the outskirts of Trieste. Severino Mingardi, a Brescia native and his wife Maria Sincovich, bought an old 30-kg roaster and a manual packaging machine. Soon thereafter, Amigos Caffè’s “logo with the sombrero” was born.

Today the roasting plant is headed by Arianna Mingardi and other members of the family; it employs 15 personnel, produces a line of 10 coffee blends, also works for third parties and boasts productivity of 1,600 kg/hour. Amigos Caffè, well known abroad, is marketed in EU and non-EU countries. 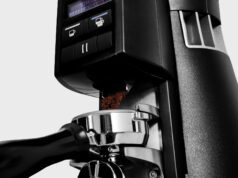